There is Hiragana that looks like this: ひらがな（this reads Hiragana in Hiragana)

Katakana that looks like this: カタカナ (this reads Katakana in Katakana)

And Kanji that looks like this: 漢字（this reads Kanji in Kanji)

The three kinds of scripts have different functions and roles, and they are usually used within the same sentence. And any Japanese person who went to school would, in general, do this with without thinking.

As children enter school, they will learn Kanji, which means Chinese character, and by the time they graduate from high school, they are supposed to know about 2000 Kanji.

So when my first daughter was born, I knew the literacy part was going to be challenging. Probably if my husband was Japanese or literate in Japanese, it would have been easier, but in my case, I am the only person in the family who knows Japanese.

I decided to go realistic with this mission. I knew how hard it is to acquire the Kanji skills equivalent to her Japanese peers, and that was not a realistic goal. But I wanted her to at least master hiragana before going to school, and from there on, build her repertoires in katakana and kanji slow and steady. When she is old enough and decide to pick up Japanese seriously, she can do it herself, but you need to have some basis to even do that. At the end of the day, that basis was all that’s necessary, in my opinion.

As a matter of fact, by the time my daughter was 3 years old, she was able to read hiragana. How did we do that!? Here I am going to share my secrets! I believe it is transferable to other languages too.

I started reading her Japanese children’s (babies’) books, showing her the letters and pictures when she was about 3 months old.

Reading to her everyday, even just 10-20 minutes a day was enough to have the visual shape of the hiragana letters instil in her brain (Children books only use Hiragana, and some Katakana in general). We should never underestimate the power of accumulation, especially for young babies.

When my mother visited Vancouver from Japan, she brought a set of Karuta. Karuta is a traditional Japanese card game (introduced by Portuguese mid 16th century) that promotes language learning and memory skills.

Among many types of Karuta, the most basic one for little children to play usually have popular anime characters. There are two kinds of cards, the ones that are read by the reader role person, and the other that are laid on the floor to be matched with what was read and picked up (or rather, slammed) by the rest of the players.

The Karuta that my mom brought had my daughter’s favourite character (anpanman). She was immediately hooked and learned how to read all the hiragana literally over night.

My mother who is a Japanese teacher and have taught many non-Japanese business people and academics working in Japan was so surprised how quickly she learned. It usually takes a long time for her students to even tell the differences between the characters, such as あ and お、or へandく.

But my daughter was able to tell the difference right away. She has been immersed in the Japanese literature since she was a baby. Even though I never explicitly taught her how to read, it was instilled in her.

Because she loved playing karuta so much, she got herself into learning the letters very naturally. We didn’t have to force anything on her. Integrating learning with playing is the key, especially for young children.

There are many useful literacy aiding gadgets out there. Don’t hesitate to use them. For example, this audio hiragana learning keyboard book was a gift from my friend which turned out to be so wonderful.

You press the hiragana key and the corresponding sound will come out from the book.

Once your child learned how to read (input), then she/he needs to output what she/he learned. Input and output should always come together.

But how? Learning how to write takes time and cannot catch up with the speed of learning how to read. This is where this audio book comes in handy. She can output what she wants to say by pressing the button. There is a feeling of accomplishment as she does it because she can actually hear what she pressed. This audio book really accelerated her learning and we owe a lot to this book and our friend who gave her this book.

4 . Don’t take a long break…any longer than a week

Kids are quick learners. They constantly surprise us how quickly they can pick up new words, new skills. But they are also quick forgetters.

I once made a mistake of getting too relaxed, took some time off from her Japanese practice. After some weeks, it was quite shocking to see how quickly her Japanese reading skills deteriorated.

So even if it’s only for 5 minutes, or even 2 minutes, it is important to practice everyday. To be honest, it is still not easy a task for us, and there are days I just can’t get around it. But I am doing my best. 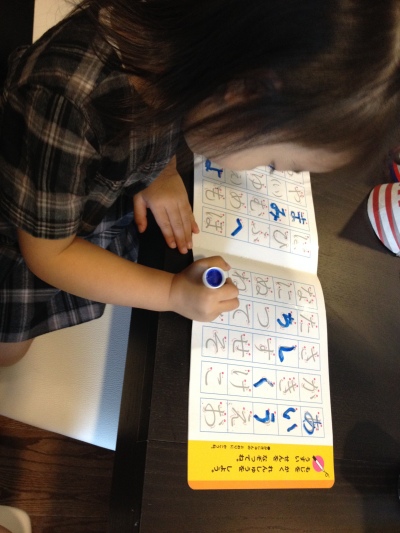 Luckily, her favourite anime show Anpanman (Redbean Man) has many workbooks for little children. When she is not in the mood of practicing Japanese, I will take these workbooks out and have her play and learn at the same time.

Also, I must add that having our Japanese babysitter, and practicing Japanese with her once a week has helped us a lot.

So here you are my strategies for early childhood literacy education in the minority language. Please share your strategies and ideas. I would love to hear from you!

This week, I am joining the link party at the Multicultural Kids Blog on “Bilingual kids, reading and writing” and the Practical Mom on “Practical Monday.” Please visit their great websites for more inspirations!